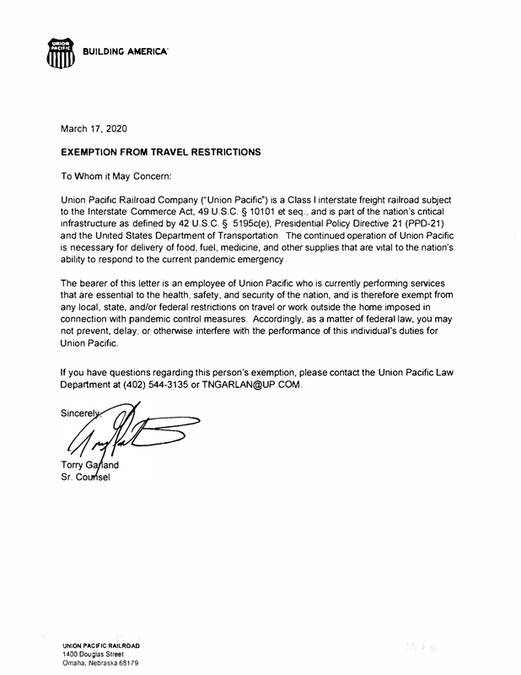 Recently, several members represented by this Committee were interrogated regarding alleged sabotage to
Remote Controlled locomotives. They were questioned alone in the middle of the night by Carrier Railroad
Police dressed in dark uniforms and wearing sidearms. They were accused of serious violations of Federal
Law and subjected to threats to their livelihoods and to possible prosecution in an attempt to coerce
information or confessions from them. This was a very upsetting experience, particularly as they were
completely innocent of these allegations.

​They did not have to face this inquisition alone. The Supreme Court has previously ruled that employees
have the right to have union representation present during questioning that may lead to disciplinary action.
Following is an explanation of this right:
The rights of employees to have present a union representative during investigatory interviews were announced by the U.S. Supreme Court in a 1975 case (NLRB vs. Weingarten, Inc.420 U.S. 251, 88 LRRM 2689). These rights have become known as the Weingarten rights.

If an employee has a reasonable belief that discipline or other adverse consequences may result from what he or she says, the employee has the right to request union representation. Management is not required to inform the employee of his/her Weingarten rights; it is the employees responsibility to know and request.

The Supreme Court has also ruled that during an investigatory interview management must inform the union representative of the subject of the interrogation. The representative must also be allowed to speak privately with the employee before the interview. During the questioning, the representative can interrupt to clarify a question or to object to confusing or intimidating tactics.

On July 10, 2000, in one of the most significant labor decisions of the Clinton era, the National Labor Relations Board extended to nonunion employees the right, already held by union employees, to bring along a co-worker to a disciplinary meeting with an employer.

While a challenge is likely, the appeals process could take months or years. Still, it is unclear whether the decision will result in big changes in the American workplace, where roughly 85% of workers aren't represented by a union.

The five-member board overruled a decision in Epilepsy Foundation of Northeast Ohio and Arnis Borgs and Ashraful Hasan (331 NLRB No.92).  The administrative law judge in that case said a 1975 Supreme Court decision. NLRB v. Weigarten, 420 US 251. granted union employees the right to bring a co-worker to disciplinary meetings with employers. But, citing NLRB precedent, he also ruled that nonunion employees don't have so-called Weingarten rights.

NLRB members John C. Truesdale, Sarah M. Fox and Wilma B. Liebrnan said the precedent "misconstrued the language" of Weingarten. While the Weingarten case involved a union representative, the majority decided that the court's ruling was based on a section of employment law that says employees have the right to "mutual aid or protection."

"This rationale is equally applicable ... where employees are not represented by a union," the decision states.

(Thanks to the University of Hawaii, Center for Labor Education and Research)
Download PDF

PDF Download of Attendance Policy
As a Union Pacific employee, you were hired for and are expected to protect your job assignment on a full-time basis. "Full-time" means being available to work as required by your assignment.

Unanticipated absence from work, particularly a missed call, refused call, no show or tardiness, can negatively impact operations, commitments to our shippers, and your coworkers' ability to plan on and off-duty activities. In addition, absences that are conditional, pending Family Medical Leave Act (FMLA) certification, can revert to unexcused absences. Such absences are taken into account for purposes of managing attendance.

It is your responsibility to notify your manager in advance of layoffs and to retain documentation related to your absence from work. However, notification and documentation alone do not excuse your responsibility to protect your job. You may be considered in violation of this policy regardless of the explanation offered if you are unable to work full time and protect all employment obligations.

In cases where an employee does not work full-time, the following process applies:
1. Employees who do not work full-time, will be identified using one or more of the following criteria:
2. An employee's full-time work opportunities compared with the employee's opportunities for time off are taken into account in attendance evaluations. Opportunities for time off include, but are not limited to, assigned rest days, layover days, vacation, time off between duty periods, as well as authorized personal layoffs that may be granted by management as the needs of service permit. If the employee's attendance record warrants, an investigation will be held; and, if appropriate, discipline will be issued based on the investigation results.

3. Retention periods under this policy are independent of and separate from retention periods computed under the Managing Agreement Professionals for Success (MAPS) policy.

4. Discipline assessed for first and second policy violations will consist of a Notice of Discipline advising the employee he/she has been found guilty of "First Offense" or "Second Offense." Employees are expected to be available for service immediately and to work full time following the first and second investigations.

6. A violation during the thirty-six (36) months of active service following a "first offense" will result in a "second offense," and a new thirty-six (36) month period of active service will begin, starting with the date of the second Notice of Discipline. If no further violation of this policy occurs during this time, the employee's attendance record will be considered clear.

7. A violation during the thirty-six (36) months of active service following the date of the Notice of Discipline assessing "second offense" will result in the employee being withheld from service pending an investigation. If the charge is substantiated, the employee will be dismissed from service.

8. Employees may discuss whether to waive a formal hearing with their Union Representatives for a first or second offense prior to proceeding with a formal hearing. The thirty-six (36) month retention period outlined above will be reduced from thirty-six (36) months to twenty-four (24) months should an employee choose to waive his/her investigation.